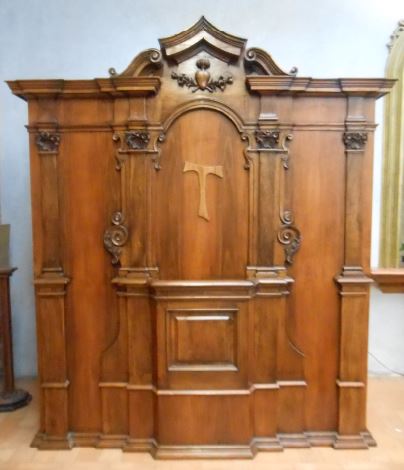 Tau Cross Confessional in the Church of Mary over Minerva, Assisi, Italy

Through my career as a chaplain in the Army I heard more than a few people say: God cannot forgive me.  The people who said this had a wide range of offenses that they believed were unforgivable by God.  There were cases of sexual infidelity (and, maybe to your surprise, more often on the part of the spouse than the Soldier).  There were acts of betrayal of friends and family.  And, as you are probably waiting for, there were men and women who had killed other men and women while in battle.

Now that I have been in civilian ministry for a little over a year I have heard a few men and women say: God cannot forgive me.  I have spoken with people dealing with their occasions of sexual infidelity, acts of betrayal of friends and family, and those who have committed great acts of violence.

I have listed above what most people will consider the “Biggies.”  Those sins that frequently bring shame and guilt.  Even more, they are nearly sure to bring judgmental reactions from those who know of these sins.  I also hear of may “lesser sins” such as lying, stealing, vulgar language, and so on (for a review of whether some sins are worse than others, please see this post).  It seems that no matter what one confesses they are afraid, or even convinced, that what they have done cannot be forgiven.  As a result, there are people who avoid confessing their sins and getting the forgiveness they are afraid is beyond their receiving.

Maybe it is because we as people are so slow to forgive.  Even though Jesus commands us to forgive others as He forgives us, many people – even those claiming to be Christians – fail to forgive.  Maybe it is because they are afraid of the priest’s response.  While I will not suggest that all abide by this standard, the Bible tells us that all human priests have their own sins and for this reason can respond gently to those whom they serve.  I only have to review the events of my own life to temper how I might respond to the events of another person’s life.  Finally, maybe the person mistakenly believes that somehow God will not know if they never say anything about it – even in the confessional.  This is most absolutely not true.  God knows everything each and every one of us has done.  Truth is – because He knows – He is waiting eagerly to receive your confession so that He can forgive and relieve people of their guilt.

A few years ago, while on pilgrimage in Assisi (of St Francis fame), I learned that the Tau Cross (now adopted by all Franciscans as the Cross of their order) is a long-standing sign of forgiveness.  Imagine how fitting it is to see the Tau Cross emblazoned on the door of the confessional.  Enter into confession and hear God reply – You are forgiven your sins.

www.StevenRindahl.com
Warriors on the Way