First, I invite you to Part 1 where you will you can read my disclaimer as to the accuracy of any assigned values to vestments.  If you do not want to go to that entry, the disclaimer is also copied at the end of this installment. 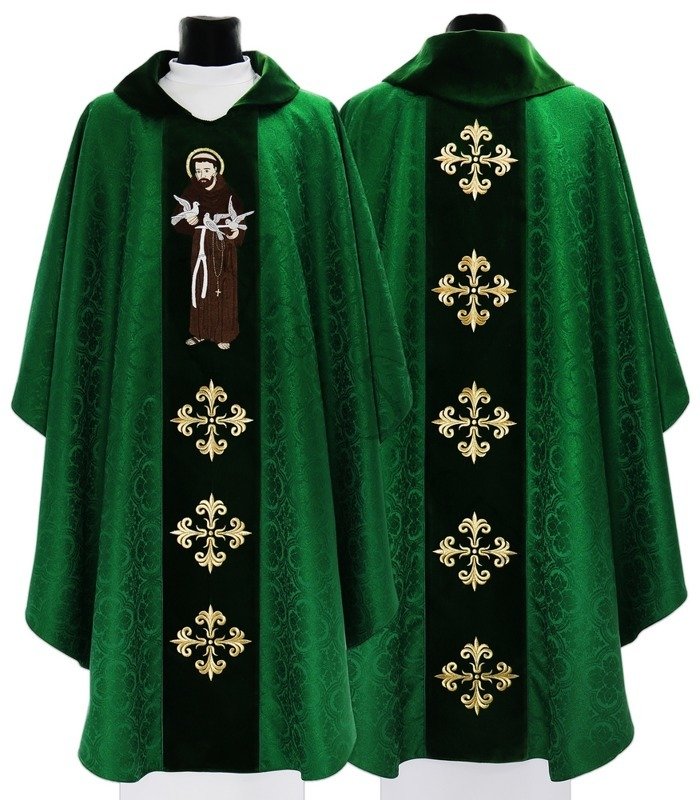 St Francis on the front with Crosses on the Back www.Chasubles24.com

In Part 3, I discussed the Stole and the Tippet – those scarf like items hanging around a priest’s neck.  In this installment, I will discuss the next layer of vestments, the Chasuble. The chasuble is the poncho-like garment the priest wears when celebrating the Eucharist.

Before going further I will point out that if your priest is wearing an alb then he is most likely also wearing a rope around his waist called either a cincture or a girdle.  This rope is worn around his waist reflects the Belt of Truth described in the Armor of God (Ephesians ch 6).

Stand therefore, having girded the belt of truth around your waist

The next item your priest will put on is the Chasuble.  As mentioned, the chasuble is typically in the shape of a poncho.  Like the stole, the chasuble is traditionally made from silk but can be made from a variety of modern fabrics.  The chasuble is frequently decorated on the front and back with some form of Christian symbols.  One of the most traditional of designs is a plain stripe in front, running top to bottom, and a cross on the back.

In this design, the stripe in front represents the pillar upon which Jesus was scourged and the cross is, of course, the means of Jesus’ crucifixion.  You will also see chasubles with a cross both on the front and the back.  Describing this way of adorning the chasuble Thomas à Kempis explains:

He has before and behind him the sign of the Lord’s cross that he may always remember the Passion of Christ. It is before him, on the chasuble, that he may look closely upon the footsteps of Christ and try to follow them fervently. It is behind him—he is signed with it—that he may gladly suffer for God any adversities inflicted by others.
(The Imitation of Christ, Book 4 Chapter 5)

In still other settings you will find the front decorated with the image of a saint or other religious iconography.  Regardless of what is on the front, the back of the chasuble is best adorned with a cross so that when the priest turns to the altar the congregation sees Jesus.

Finally, what is the greater sacred symbolism ascribed to the chasuble?  There are a couple (at least) ideas.  The first is, going back to the Armor of God, that the chasuble represents the “Breastplate of Righteousness.”  The other piece of symbolism that is particularly comforting is that it represents a tent.  Not just any tent but the “Tabernacle in the Wilderness.”

The Tabernacle in the Wilderness was built so that God could be present to His people.  In Christianity, we know that it is Jesus who is God the Son who has become directly present with His people.  Furthermore, we have in our ordained priests people who are serving at the Altar en persona Christi – they are representing the person of Jesus.  You see Jesus is representing us, ministering for us, in the Kingdom of Heaven.  The priest on Earth is, by the commission of Jesus, making us present in the ongoing actions of Jesus in Heaven.

Now the point in what we are saying is this: we have such a high priest, one who is seated at the right hand of the throne of the Majesty in heaven, a minister in the sanctuary and the true tent which is set up not by man but by the Lord.
(Hebrews 8:1–2)

The Chasuble – A simple sign to remind you that Christ dwells/tabernacles among you and is ever ministering on our behalf in the sanctuary of Heaven.

First a big disclaimer: You need to know up front that the majority (possibly all) vestments and other clerical wear got their start in something quite practical (such as keeping the priest warm in ancient churches without the benefit of modern HVAC systems).  Once worn, however, various traditions of sacred symbolism have been assigned to the many different things worn.  The next thing you need to know is that the various traditions of sacred symbolism are not all the same.  You may find one person say a particular piece of vestiture means one thing when somebody else says it means another.  It is not (necessarily) that one is wrong, and the other right (although possibly so) but that they are both “right” in that either explanation of sacred symbolism is a valid way of interpreting the item.  In this series, over the next few days or weeks, you will learn the symbolism as I learned it.  I encourage to read about vestments and their meanings and see what else other people have to say as well.

1 Response to Why Are You Dressed Like That? Part 4