Your Wounds are Healed by the Wounds of Christ

The Bible says, Jesus “himself bore our sins in his body on the tree, that we might die to sin and live to righteousness. By his wounds you have been healed.” (1 Peter 2:24) 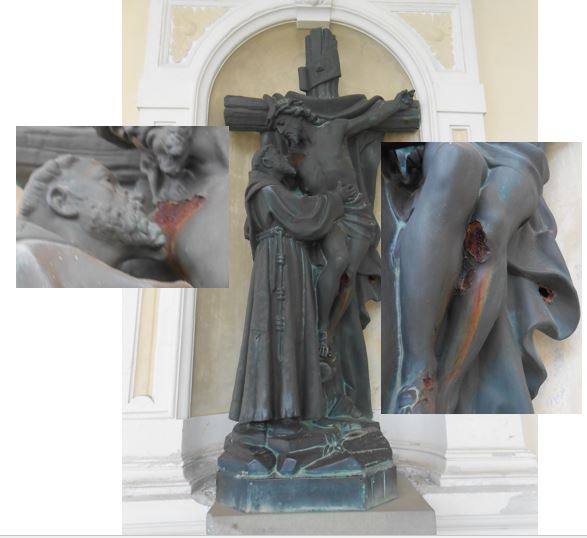 Today, almost 2000 years after the day it happened (most likely in April of AD 33) it is quite comforting to put the crucifixion in the past. We can think to ourselves – “Oh, how terrible it was. How awful it is what THEY did to Jesus.” Faithful and non-faithful alike comfortably distance themselves from that fateful day. The thing is we really should not. Jesus did not die only for the sins of those who lived at the time of His crucifixion. Jesus died for all sins from all ages, those which occurred prior to His earthly lifetime, those during His own earthly lifetime, and those that would occur after his death, burial, resurrection, and ascension into Heaven.

According to biblical account found in the book of Revelation, Jesus “ransomed people for God from every tribe and language and people and nation.” (Rev 5:9) And, those people are from every age because God determined to save His creation through the sacrifice of Jesus “who was slain from the creation of the world.” (Rev 13:8) So it does not matter whom you hang-out with, what language you speak, what your ethnicity is, or where you live or hold citizenship. Jesus has wounds for you. In the picture above you see a bronze of Jesus that has sustained some damage. This bronze happens to be at a Franciscan monastery in Italy. It is a wonderful, beautiful, and peaceful location. The region is known a Belvedere (Italian for good view) and everywhere you look is gorgeous. But a few decades ago the area was ravaged by war. The Allies of World War II were working their way up the Italian peninsula and there was bombing, artillery, and foot soldiers trying to push the German forces back and force their surrender. The damage you see on the bronze was caused by the Allies (and although I have heard conflicting opinions it was most likely caused by the US – even if it was not it was caused by US ordinance fired by those we equipped). I find it interesting (and quite convicting) that there is damage on Jesus’ side and his feet – there is damage where Jesus sustained wounds. And that damage was caused by the US – those wounds were caused by us.

You see it does not matter that we were not there that day almost 2000 years ago – Jesus was still crucified for our sins. It does not matter that were not there almost 2000 years ago to swing the whip that tore at His back or hammer the nails into His hands and feet or stab the spear into His side our sins today were the cause of His wounds then.

Now you might be thinking that this is a play at guilt or shame but it is not. Everyone who has ever lived, who is alive, and whoever will live has sinned – has done things they know are wrong and wish they never did. The Bible acknowledges that fact when it explains that, “there is no distinction: for all have sinned and fall short of the glory of God, and are justified by his grace as a gift, through the redemption that is in Christ Jesus” (Romans 3:22-24) – it is not an accusation; it is an observation that everyone needs healing. And the good news is that even though it is because of us that Jesus sustained those wounds it is by his wounds you can be been healed.

Do you want to experience your healing? Confess that you added wounds to Christ and ask He heal you with those wounds by pouring out on you His grace and forgiveness.

This entry was posted in Christian Living, Evangelism, Theology. Bookmark the permalink.