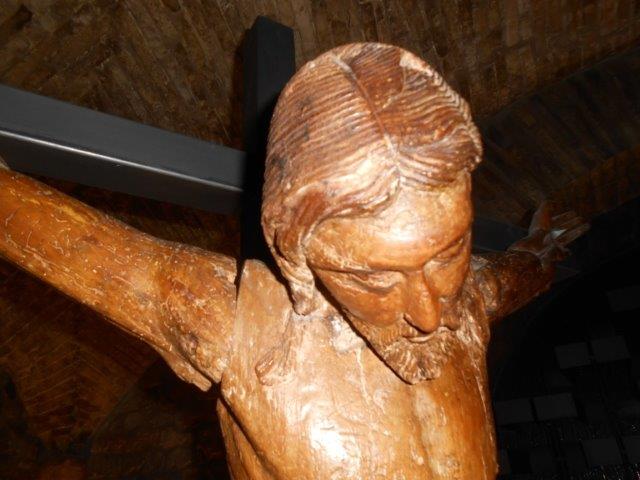 Trust In Me – I Know Your Pain

When I was growing up I heard a lot of comments from a variety of sources raising concern with the practice of some denominations to use the crucifix as an emblem of Christian faith. “The problem with _________ is that they keep Jesus on the cross.” I heard from detractors either in those exact words or in words very similar. A few years ago I was involved in the planning of a funeral where within the family there were a variety of Christian denominations represented. When it was revealed that there would be a cross carried into the sanctuary as part of the funeral procession one of the representatives of the more staunchly “Free Church” Protestant denominations quickly protested that there would be no crucifixes at the funeral. “Jesus is not still on the cross” he protested loudly.

I have long sympathized with the position expressed in these type comments. Partly because I did not have a point of view expressed to me to compare it against and partly because my own theological understanding was formed in the camp of Christian Triumphalism. Hymns with lyrics like these were the staple:

I heard about a mansion
He has built for me in glory.
And I heard about the streets of gold
Beyond the crystal sea;
About the angels singing,
And the old redemption story,
And some sweet day I’ll sing up there
The song of victory.

The clear message was that the death of Christ occurred, it is over, and now all we need to do is celebrate our salvation and all the benefits it brings. In that message there is some truth that I will not argue against. But at the same time there is so much missing that the message needs to be part of a bigger and more complete message or it becomes a stumbling block instead of an aid to faith.

That is why we still need the crucifix (maybe more than ever as biblical literacy seems to be non-existent). Too many people who are hurting (Christian and non-Christian alike) cannot hear and believe the words “Victory in Jesus” when they only know the Sunday School “Good Shepherd” version of Jesus and not the “Sacrificial Lamb” version of Jesus (Described in Revelation 13:8 as “the Lamb who was slain from the creation of the world”). How can a person relate to the one who is perfect in every way?

There is a joke about how a person does not trust those who have not hurt the same way the person hurts given specifically from the veteran’s perspective:

Q. How many combat vets does it take to screw in a light bulb?

A. You wouldn’t understand – you weren’t there.

So just how does the victim of pain, violence, false accusation, rape, slander, etc, etc believe that the perfect, clean, kind to children, Sunday School Jesus could ever understand?

By reminding those that hurt that Jesus hurts for them. Reminding the hurting that every pain, every wrong, every shortcoming and sin that they ever experience Jesus has taken, in His own beaten and whipped body, to the cross.

So it is true that Jesus is no longer on the cross but Jesus’ work on that cross almost 2,000 years ago is still reaching forward and healing the pain of today and people need to know that. That is why we still need the crucifix – now more than ever.