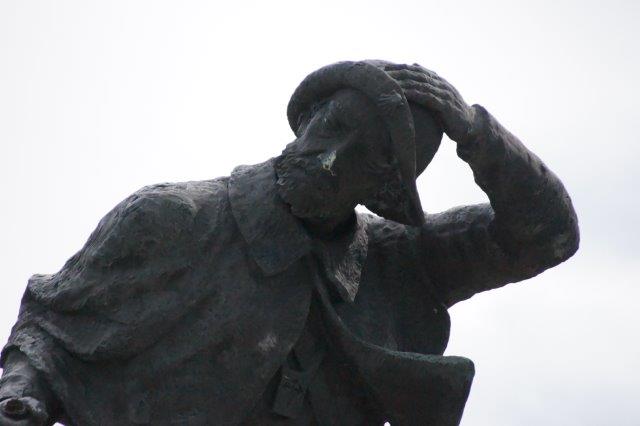 Most people who are facing as strong of a headwind as the man of this statue would turn around, quit, go inside and wait, or do just about anything but keep walking into the wind.  Not having to face the wind is a luxury of  the modern world.  A luxury that many now simply take for granted.  This photo was taken while on the Camino de Santiago just a few days before finishing my pilgrimage.  It was on one of the few grey days I faced while traveling.  I wondered what I would do if the sky opened and the rain poured.  The simple answer was to keep walking – there was not another choice readily at hand.  That is a bit of the point of being a pilgrim – you do what you must do to accomplish what must be done.  It is a rather simplistic but valuable truth.

In bygone days of you were getting from one point to the next and a wind blew up you simply had to face the wind and keep moving forward.  One might reply – So what.  These are not the bygone days.  That person would be correct.  We do not have to face the wind anymore.  We can almost always wait.  More often, we get in enclosed motorized vehicles which protect us from the climate to go where we wish to go without any discomfort regardless of the weather.

All of that acknowledged, there is a benefit to facing the wind – to facing adversity.  The first thing to note is that it builds character.  Winning all the time makes for very poor losers.  At the same time, the reality of life is that sometimes you lose.  Things do not always go your way.  It is not because the system is rigged (it almost never is).  It is not (at least not most of the time) because of color or gender or age or looks (good, bad, or otherwise).  It is simply because sometimes things work in your favor and sometimes they do not.  Somewhere along the way we have forgotten that truth.

Society, at least in the United States, has so wrapped ourselves (and more importantly – our children) in cotton-wool that nobody (or at least very few) can feel the normal bumps and bruises of life.  Children go from victory onto to victory and cannot fathom losing.  I do not blame this generation for their detachment from reality.  So many people want to make fun of and chastise the “Everybody Gets a Trophy” generation while ignoring the fact that it is their/our generation that was handing out the trophies.  The results are truly baffling.  Schools call off classes because the candidate of choice did not win an election.  People who feel that they are in danger are supposed to feel safe because somebody else wears a safety pin.  Portions of the population feel guilty for crimes that they did not commit while failing to hold people accountable for crimes that they do commit in order to display tolerance.  These traits are nonsensical and counter-productive.  And, I believe, many would fade away if we all had to face the wind more often.  Go outside with a project and do not quit until the project is done or it beats you – do not come in just because it got hot or started to rain.  Play sports and lose a from time to time.  Run races and come in second, third, or last as the case may be.  Recognize that “safe spaces,” coloring books, and safety pins will not stop a person bent on violence.  Be ready to engage in a real defense or admit that you rely on somebody else to stop violence through the use of violence on your behalf.

A frequently heard phrase these days is “the struggle is real” and is typically said in jest about a mere inconvenience if that.  I think we would all be better off we actually faced some struggles.  Face the wind.  Face some hardship.  Face some tribulation. Learn to adapt and overcome.  You will be a better person as a result.

We rejoice in hope of the glory of God.  Not only that, but we rejoice in our sufferings, knowing that suffering produces endurance, and endurance produces character, and character produces hope, and hope does not put us to shame, because God’s love has been poured into our hearts through the Holy Spirit who has been given to us.
~Romans 5:2-5~